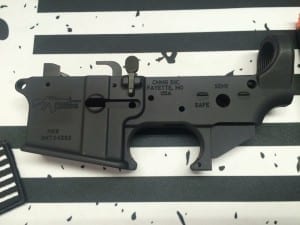 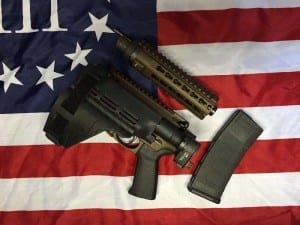 had lots of questions on the breakdown AR pistol in regards to the 9mm version.  Yes it can be done, and it’s actually my preferred caliber for it.  My choice on 9mm is the CMMG MK9 lower.  I know that most consumers out there today like the Glock magazine lowers because they already carry a Glock handgun as their everyday carry and so they have plenty of mags for it.  I do too, however I like the cheaper magazines for the CMMG, usually around $15 retail for the 32rd ASC mags, and $40 for the Glock 30rd mags.  Also, the CMMG lower will lock the bolt carrier group to the rear after the last shot, without having to tinker with it.  For some shooters, they don’t care if it locks after the last round, and that’s fine, it’s all preference.  Now, on to the meat and potatoes.  The Law Tactical folding stock adapter is a must for this setup and requires you to use the adapter piece that inserts into the bolt carrier group.  This can be problematic for some Glock BCG’s.  Because all the 9mm BCG’s that I’ve seen, are solid in 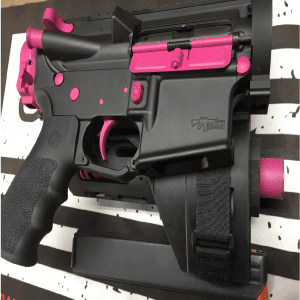 back-end for added weight due to the blowback system. you’ll need a BCG that has the removable internal piece.  Glock mag lowers (sometimes) have a completely removable backside, and cannot be used with a Law Tactical Folding stock adapter.  All CMMG 9mm BCG have the “correct” backside, however, you will need a lathe to cut a portion of the BCG off to make room for the Law Tactical adapter.   Now for the Pantheon Arms “Dolos” quick detach kit.  This kit is designed for gas impingement, and requires a gas block and tube for the Dolo’s to work properly.  Given that the AR 9mm is blowback, you will have to install a gas block and tube so that it works correctly.  What I do is cut the gas tube off  just inside the hand guard so that none of it is exposed outside the Dolo’s kit, and it’s one less thing to bend or break.  I’ve built over 20 of these breakdown pistols, and from my experience, the 556/223 version has had the most complaints.  If you do it on a 7.5″ 556/223, it’s loud as hell.  If you don’t wear ear plugs while shooting it, you’ll never need them again.  The 556/223 version is also a pistol gas system, which is very high pressure and very abusive to the weapon, which will require some periodic maintenance to keep it running efficiently.  I highly recommend running a 9mm weight buffer with the 556/223 7.5″ to soften the abuse and lessen the recoil.  The 9mm version, is a blowback system, and I’ve yet to have an issue out of any of them.  What’s even better, is I’m about 7000 rounds deep on one of the 9mm’s, and what I’ve come to find out, is this weapon prefers CCI Blazer Aluminum case ammo.  It’s not too often you get an American made gun that performs better with cheap ammo or something other than a brass case.   The downside to the 9mm breakdown pistol:  It cost about $400 more to build, but the ammo is cheaper, so over time it should balance back out ( depends how much you shoot).  And one last kicker for the 9mm: it’s not near as loud as its 556/223 counterpart.   Also, try to use MilSpec triggers with 9mm, they are picky and I’ve found milspec triggers are far more reliable.